Working with a Medical Sales Recruiter

Last month I had the pleasure of being written up in First Interview’s Newsletter when I teamed up with another Medical Sales Recruiter. Here is the story:

Recently, I had the pleasure of working with Andrei Hintze on searches in Fl and VA with a relatively new client. I am trying to become their go to recruiter and so these searches were important to solidify my value. Andrei engaged and stood by my side through some really strange twists and turns and some profile tweaks along the way.

At one point, I was concerned the manager we were working with might be replaced. And we had to wait 2 weeks for a final interview to happen that was supposed to be a day off. Andrei assisted in keeping the candidate engaged throughout the process. 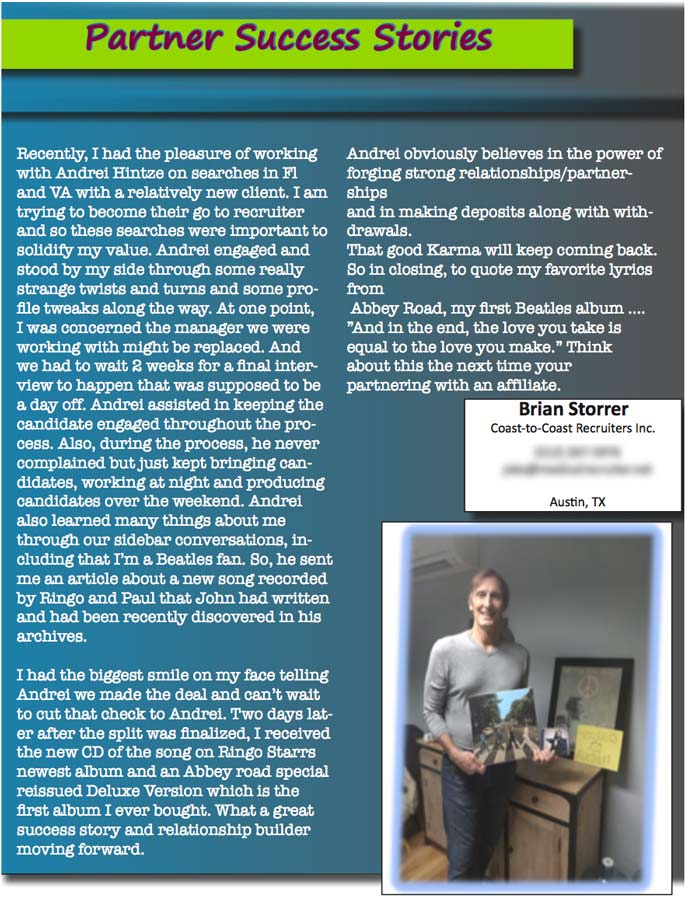 Also, during the process, he never complained but just kept bringing candidates, working at night and producing candidates over the weekend. Andrei also learned many things about me through our sidebar conversations, including that I’m a Beatles fan. So, he sent me an article about a new song recorded by Ringo and Paul that John had written and had been recently discovered in his archives. I had the biggest smile on my face telling Andrei we made the deal and can’t wait to cut that check to Andrei.

Two days later after the split was finalized, I received the new CD of the song on Ringo Starrs newest album and an Abbey road special reissued Deluxe Version which is the first album I ever bought. What a great success story and relationship builder moving forward. Andrei obviously believes in the power of forging strong relationships/partnerships and in making deposits along with withdrawals. That good Karma will keep coming back.

So in closing, to quote my favorite lyrics from Abbey Road, my first Beatles album …. ”And in the end, the love you take is equal to the love you make.” Think about this the next time your partnering with an affiliate.

We are sales recruiters that specialize in connecting professionals looking for nationwide sales opening and companies seeking the most talented, driven salespeople.